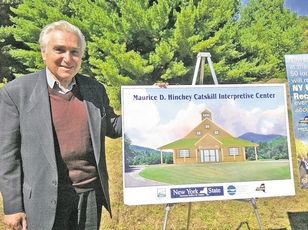 Former Congressman Maurice Hinchey attended the groundbreaking Tuesday for a tourist center in Shandaken that will bear his name. Hinchey first secured funding for the project back in the 1980s.PAULINE LIU/Times Herald-Record

On Tuesday, the former congressman joined Department of Environmental Conservation Commissioner Joe Martens and local groups to celebrate the center which will bear his name.

The Maurice D. Hinchey Catskill Interpretive Center is slated to be a 1,700-square-foot facility located off State Route 28. The project is expected to be completed next spring…..

By Ned Resnikoff and Amanda Sakuma

NEW YORK – They’re calling it the largest mobilization against climate change in the history of the planet. Hundreds of thousands of demonstrators of all ages and from around the world turned out for the massive People’s Climate March Sunday, filling the streets of midtown Manhattan with demands for global leaders take action to avert catastrophic climate change….